Godrevy Lighthouse from South West Coastal Path, is a must see when you are in the St. Ives Bay Area.

Accessible via level walking paths, part of the Godrevy South West Coastal Path, you won’t be disappointed with the view that awaits you.

We were there in February and the sea was rough but this just adds to the whole drama of the photos that we captured especially on a clear and sunny day.

This closer alternative, also close to a Godrevy Public Toilet is a much shorter track to the lookout point for Godrevy Lighthouse. We estimate a 50 minutes round trip walk from the National Trust Car Park. The walk from the Field Car Park to the Godrevy look out point is only about 5 minutes.

Follow the coast line and you will be treated to more amazing view at Godrevy Coast, Mutton Coast, Kynance Coast and Navaz Point. See walking map and below taking from the sign at the main car park (National Trust Car Park). 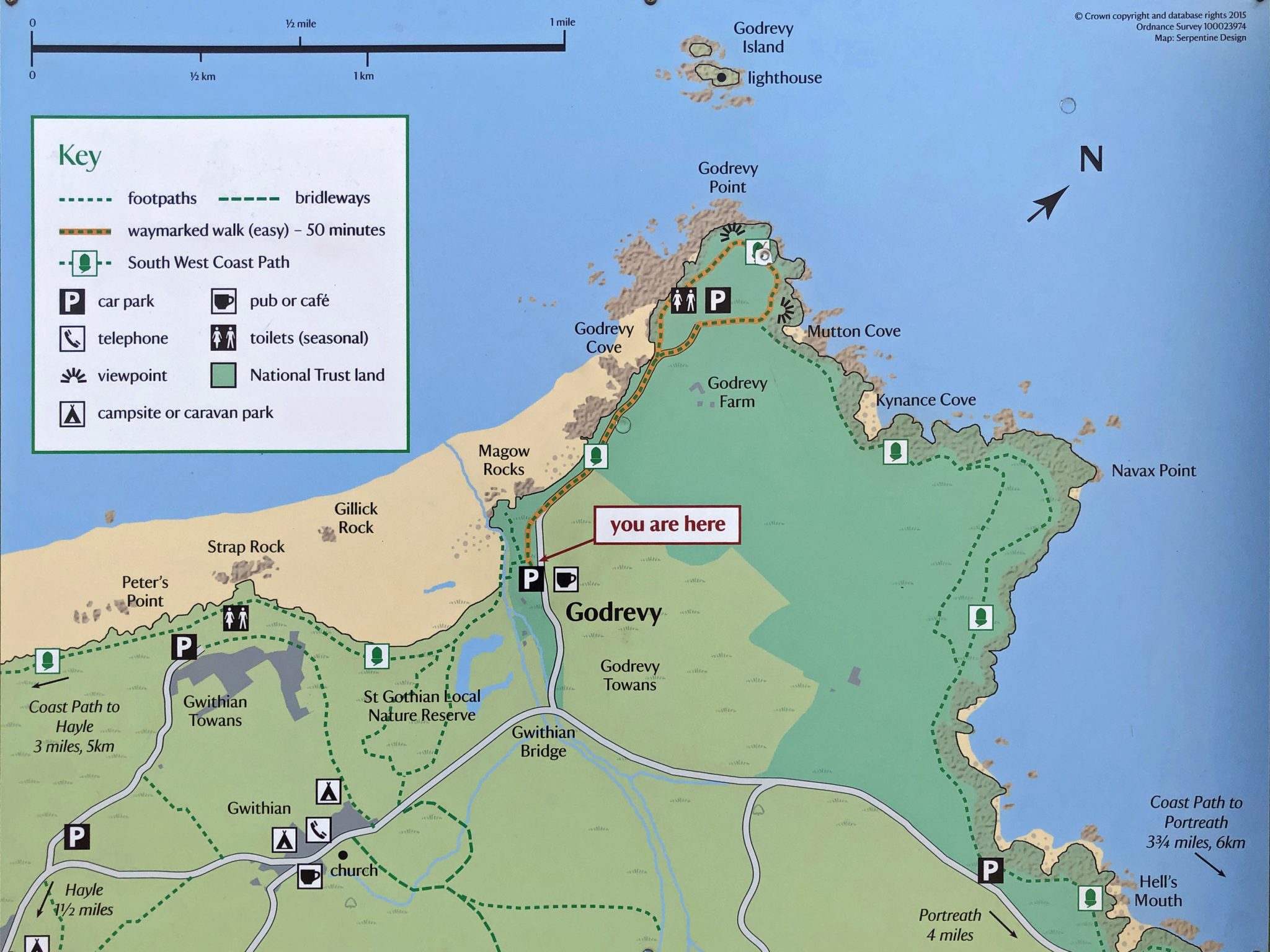 Follow the South West Coast Path, an easy and level route around the Godrevy Head and enjoy the views up and down the coast from St Ives to Trevose Head. But the biggest attraction here will be the view of Godrevy Lighthouse. See it from different parts of the route, it gets better every time. Use the walking map above, follow the waymarked path.

Here is one of the best place in the South West to catch a glimpse of the grey seals. Although, during our visit, the sea was rough and there were no grey seal in sight. You can usually see them from the cliff tops at Godrevy Head. A good time to see this is between September and May. The grey seals could be seen on the beaches.

If you are into surfing or wanting to learn how to surf, book a lesson with a licensed surf school near the area but remember the sea can be dangerous. Always follow the RNLI lifeguard signs and flags.

Head over to the Godrevy Cafe. They serve breakfast, lunch and tea.

How to Get There

Travelling from St. Ives, we used the Hayle Bypass A30 then the first exit at the round about and a right turn after Lidl Hayle. This takes you onto B3301 until you see signs for the Rockpool Cafe, the entrance to Godrevy National Trust Car Park is immediately after the Rockpool Cafe.

Scenes of the Godrevy Lighthouse from Godrevy Beach

Zoom out to see more

Sam runs a design and digital learning consultancy with his partner in the beautiful Heritage City of Bath, England. In his spare time, he tinkers and builds even more websites and spending most of his waking hours with his family. He is very much into photography and travel and is really into good food.